The Beacon Manufacturing Company was originally located in New Bedford, Massachusetts. In 1925, the company began operating on former farmland in Swannanoa, North Carolina.

By 1935, all operations had been moved from New Bedford to Swannanoa. Much, if not all, of the Massachusetts plant was moved by rail to North Carolina, not only the machinery but also bricks and other structural components. A mill village was built directly across the street from the plant, allowing workers to walk to work from the closely spaced wood-frame single-family dwellings. 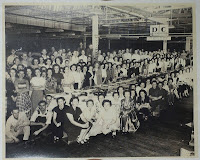 During World War II, the plant employed more than 2,000 people, who produced blankets for the military. After the war and for the next 25 years, blankets were produced for the general market, and approximately 1,500 workers were employed at the mill. The company was then sold several times, and financial problems resulted in the 2002 closing of the mill. The machinery and production materials were sold to the highest bidder at a bankruptcy auction.

Owner-ship of the mill was transferred to the bank holding the mortgage; the mortgagor put the mill up for sale.