Serpent Child Ensemble, a Swannanoa arts group, will present portions of its documentary film about the rise and fall of the Beacon Blanket Mill at the Bee Tree Fire Station Community room

Saturday, June 6, from 1 til 3pm. There will be a panel discussion with former Beacon employees led by Dr Roxanne Newton and a presentation of original songs about Swannanoa and the village by local songwriter Bert Brown.

Serpent Child Ensemble, which produced the popular Way Back When series of plays at the Black Mountain Center for the Arts is led by Jerry Pope and Rebecca Williams.
“We were so taken by the loyalty the Beacon employees, even after the mill had burned down,” Williams said. “We included many Beacon stories in the plays, but felt there was a bigger story to be told. The detail and scope we 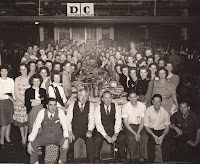 wanted to present called for a documentary.” “This film will really be about the idea of community as it has changed over the years,” Williams added. “Most of the folks who worked at Beacon started out as farmers, then became factory workers, and now live in the post-industrial economy. It’s the history of America right here in our little town.”

While the film is far from being completed, the filmmakers wanted to show the community what they’ve done so far and get some feedback. To this end, Dr Newton, director of the Humanities and Fine Arts Division at Mitchell Community College, will lead a public 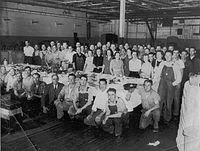 discussion of issues raised in the as yet un-named film. Five former Beacon workers will tell stories and give their input.

Bert Brown, grandson of longtime Buncombe County Sheriff Lawrence Brown, will present just a few of the many songs he composed for the Way Back When plays, including the popular “Swannanoa, Where are You Going.”

This project is made possible in part by a grant from the North Carolina Humanities Council, a statewide nonprofit and affiliate of the National Endowment for the Humanities. It is also supported by Swannanoa Valley Museum, Swannanoa Pride Community Coalition, The University of North Carolina- Ramsey Library – Special Collections, and Warren Wilson College.

Learn More About the Documentary Film at
http://beaconmilldocumentary.blogspot.com/2009/05/story.html