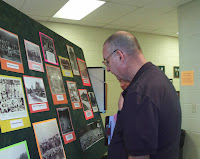 A day of celebration took place as members of the community came together to share stories, photographs, and other memorabilia related to Beacon Blanket Mill and the people who worked there. 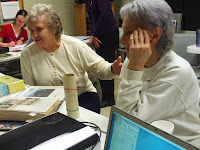 Volunteers set up an Exhibit with historical photographs
taken from the Swannanoa Valley Museum archives.

Local residents showed up with stacks of photo albums with pictures to be scanned.

We conducted the story circle with 15 former Beacon employees who shared there stories and were filmed for the upcoming docuementary film.

RB: The first question is: how long did you work at Beacon?
RK: Uh, I worked at Beacon for 13 years... and, uh, I enjoyed every minute of it. I met a lot of friends, and, um... I kept a lot of friends from Beacon when I lived there. We still, we still get together, and we still call and we still talk to ‘em, and a lot of them’s passed on that I miss.
RB: Um, so, um, what department did you work in?
RK: I worked in the spinning department, and of course I had never been in a, a mill before -- I had worked in a hosiery mill but that’s so much different -- when I went over there, it was, uh, amazing to see, the blankets and things that they made. But we were, the spinning, you, um, you had two frames, and you had like eight spools of roving that they brought to you and you would tie it in and spin it on the, the, spin it on the bobbin, and then course they were going to make the blankets, but lot of times we would be off talking or, the smoking booth was real close to me and I always liked to talk to everybody that was up there smoking, I didn’t smoke but I always liked to talk to everybody up there. And, um, lot of times you would get [clears throat] carried away, excuse me, you’d get carried away and, lo, your spinning, I mean your spinning frames would, you know, they wouldn’t run without you there helping, so you’d have a hard time getting caught up after you went back, but you had a lot of help, your friends would always help you.