SEE YOURSELF IN THE MOVIES 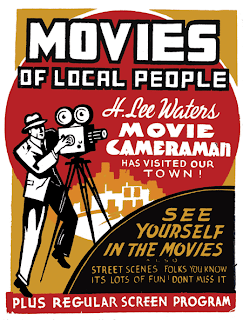 Ever want to see yourself on the big screen ?

Apparently you aren’t the only one. Filmmaker H Lee Waters traveled throughout the south during the Great Depression and captured images of small town life in 112 communities in the Carolinas, Virginia and Tennessee. While researching archival materials for the upcoming documentary movie, Blanket Town, Serpent Child Productions unearthed rare 16mm footage shot by Waters in Swannanoa in the late 1930’s.

Designed as a way to supplement his income as a studio photographer, Waters would make movies of local folks at factories and small businesses, schools, sporting events and busy public intersections. Waters would edit the film and show up 2 weeks later to screen the “Movies of Local People’ at the town’s movie theater receiving a percentage of the box office admission. The Swannanoa footage features the Beacon Mill, businesses on Whitson Ave, and school children outside the old Swannanoa school.

See a trailer for a documentary about H. Lee Waters
The Cameraman Has Visited Our Town by Tom Whiteside