Shooting the Loray Mill: Behind the Scenes with Director of Photography, Sam Scott


Over the past several years, I have traveled around the south to visit and shoot old manufacturing sites.  Unfortunately, most of these historic mills and factories have fallen into disrepair after decades of neglect.  The inspiration for this documentary project, the Beacon Manufacturing Plant in Swannanoa, NC, was no exception.  After closing down in 2002, it was left abandoned until burning to the ground at the hands of an arsonist in 2003.

So you may ask, how do you make a film about a textile mill with no textile mill?  Well, that's where the Loray Mill fits in.  We realized that the fate of our Beacon plant was shared by countless other mill towns across the south, so we decided to branch out and take a closer look at some of these other mills.


Shooting in the Loray Mill posed a variety of exciting shooting opportunities and challenges.  First of all, it is the first mill that we have been able to gain access to which was still in reasonable condition and safe enough for us to go inside.  And second, since all of the textile machines had been gone for several decades, we had to figure out a way to get across the idea that an empty building had once been a bustling factory.  But most importantly, it meant that we could stop relying solely on old photographs to learn about the inner workings of textile mills and get a first hand look ourselves.

As you can see below, virtually every single piece of machinery has been removed from the mill. But looking down across the vacant factory floor, you can begin to get a sense of the scale.  Can you imagine 2,200 employees working in here? 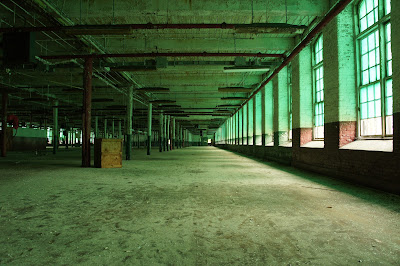 By now, you are probably wondering why all of the shots are an erie green color.  This is because almost all of the glass window panes were replaced by green plastic panels.  While this helps protect the interior of the mill from heating up in the sun, the low level of light makes it a difficult location to shoot.

We managed to catch the sun at just the right time of day, so that it illuminated the interior of the building.

While shooting on the third floor, we happened to notice a striking resemblance to a certain movie series...

The interior of this mill has been used over the years as a set for a music video and a television show among other things.  However, in just a couple of years since, water damage has made this part of the mill inaccessible and hazardous.  So we had to stop here in our exploration.


But, as the Loray Mill is over 600,000 square feet, we had plenty of other nooks and crannies to check out. 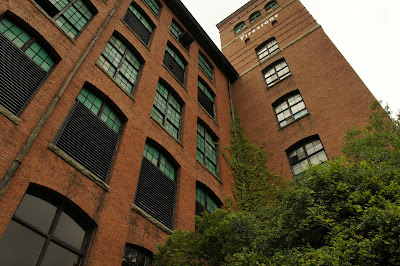 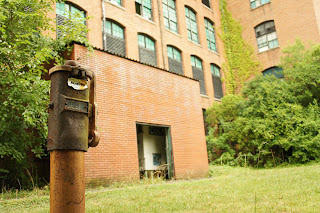 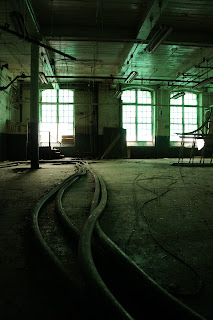 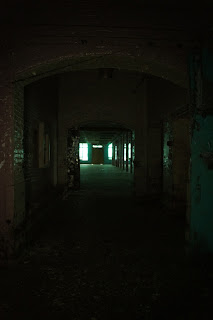 
It was almost like exploring an ancient tomb.  The smell of mildew and old paint.  Hidden rooms and dimly lit passageways.  I could easily imagine a golden idol sitting on a pedestal just around the corner.

Shooting at the Loray Mill was a lot of fun!  And after 3 or 4 hours inside, it's funny how you really come to appreciate the beauty of peeling paint.